From playing the role of a leopard in a primary school play to the sci-fi comedy film Attack the Block, to a movie based on the Nigerian civil war, Half of a Yellow Sun, spiraling to the role of Finn in Star Wars: The Force Awakens, and currently peaking in a reprise in the 2017 sequel, Star Wars: The Last Jedi, let’s take a look at the man of the moment, John Boyega, who recently spent the yuletide and New Year holidays in Nigeria, in his own words, “searching for a Nigerian wife”.

Who is John Boyega?

John Adedayo B. Adegboyega, popularly and professionally known as John Boyega, was born on 17 March 1992  to British-Nigerian parents,  Abigail (née Aboderin), and Samson Adegboyega, a Pentecostal minister, in London, England.

He was a pupil of Oliver Goldsmith Primary School, where he was noticed by the artistic director of Theatre Peckham, Teresa Early while acting in a play there at the age of nine.  He would later go on to join the theatre at the age of 14, which trained young people living in south London with theatrical inclinations. Notwithstanding his interests in making John grow up to be a preacher too, his father supported his son’s theatrical interests.

Boyega started his secondary school education at Westminster City School in 2003, where he played different roles in various school productions.

He attended South Thames College between the years of 2008 and 2010 to study for a National Diploma in Performing Arts, and his activities there included playing the title role in the famous Othello. He proceeded from there to the University of Greenwich to study Film Studies and Media writing but dropped out later to set his mind and energies to his acting career.

After some time spent training at the identity school of Acting in Hackney, Boyega featured in Six Parties, which was performed at the National Theatre, and Category B, which was at the Tricycle Theatre, before he was offered a role in Attack The Block, released in 2011. In September of the same year, HBO officially announced Boyega would be featured in the boxing drama Da Brick, a movie with a plot loosely depicting the life of Mike Tyson. Also in 2011, he played Jamal, a drug dealer who tries to become a gunrunner in the movie Junkhearts.

Boyega’s rise to fame got a boost as he was chosen by Fionnuala Halligan of Screen International as one of the “UK Stars of Tomorrow 2011” and graced the front page of the July 2011 edition of the magazine.

In the third month of 2012, he played the role of Ugwu in the film adaptation of Half of a Yellow Sun, written by Chimamanda Ngozi Adichie.

In April 2014, Boyega was cast as a lead character in Star Wars: The Force Awakens, where he played Finn, a stormtrooper for the First Order. The film was released in December 2015 and shot Boyega into a meteoric rise to fame. He received widespread acclaim from both the movie audience and critics.

Boyega formed his own production company in January 2016, dubbed Upperroom Entertainment Limited. In June of the same year, he announced that his company would alongside Legendary Entertainment, co-produce the sequel to the 2013 flick Pacific Rim, in which he also got a lead role.

2017 saw John Boyega star in Kathryn Bigelow’s Detroit, a film based on the Detroit riots in 1967. In the same year, he played Finn again in Star Wars: The Last Jedi. He was listed by Forbes as the 10th highest-grossing actor of 2017 in the same year.

John Boyega spent the Xmas and New Year holidays in Nigeria, in his own words, searching for a wife.

The following are the movies the star actor, John Boyega has featured in so far.

As at the time this post was published, the net worth of John Boyega is $2.5 Million. He made much of that amount from the movies he has acted so far and other investments he ventured into. 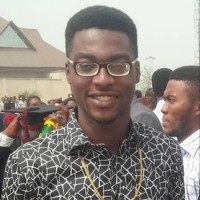